The WarGear board designer enables designers to do so much more than put together the standard type of continents that we all are familiar with. Doubtless, not all of the possibilities have been explored, but this page is meant to catalog the types of continental forms and bonus structures that have been used by designers on WarGear.

Member - A member of a continent is a territory that is required to be held by a player in order to receive the continental bonus. A continent must have one or more members.

Factory - A factory is a special type of continent. Instead of giving the bonus to the player to be placed on the board, the factory applies the bonus to pre-determined territories. The range of things that can be done with factories is beyond the scope of this page, but it is important to understand that most continent forms defined on this page can be applied to factories as well. Learn more about designing with factories here. 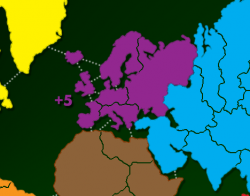 Everyone is familiar with the standard continent in WarGear: control all the territories that form the members of the continent, and get a nice bonus for it. On basic maps, the continents are obvious from the graphics, since their members are mutually exclusive (i.e. every territory is part of one and only one continent). Take, for example, the basic Risk board. If you want to receive the +5 bonus from Europe, simply take and hold each of the purple territories.

Design Considerations
Board designers often face the question of how to set the bonus levels for the different continents they have planned for their board. Should Rhohavion give a +5 or a +8? If East Russia is +6, what should West Russia be? Should there be an additional bonus for holding both together?

Again taking the basic Risk board as an example, compare North America and Europe. While the former has 10 member territories and the latter only 7, both yield a bonus of +5. This is justified because N.A. can be defended with only three borders (Alaska, Greenland, and Central America) while Europe must be defended with four borders (Iceland, Ukraine, Southern Europe and Western Europe) and is also at the center of action.

There are many types of continent bonus schemes that are not based on the simple logic of geographic grouping and exclusive territory membership. Examples include hordes, anarchy, collector continents, non-contiguous continents, multiplier continents, and negative-bonus continents. This tutorial will discuss the uses and purposes of each, as well as tips for how to incorporate them into your board designs.

Continents whose members are not connected directly on the board. Should discuss uses and variations of this type of continent.

In the example below from War of the Roses, the three circled territories with the Red shields are not contiguous, yet if a player captures all three, they get a continental bonus.

Continents that give a negative instead of a positive bonus to their controller. Why would you want to use this? What sorts of creative uses has this design method been employed in? 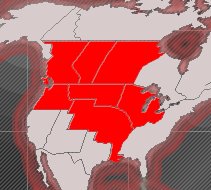 A continent bonus structure in which a bonus is given for holding a central territory as well as bordering territories. In some cases, not all neighbors are required (see variants, below). What you wind up with is a hordes-continent for each territory on the board (or each territory in a defined region or of a defined type). This can be a pain to input by hand into the designer, which is why Ozyman's WGAME has a tool to automate the process. Named for the board Hordes originally created by Cramchakle on a different site. In this example from the WarGear version Infection), the member territories for the Dakota hordes continent are highlighted in red.

In the example below using WarGear Modeling Language, T11 does not have to be controlled by the player to receive the hordes bonus because it does not border T1. 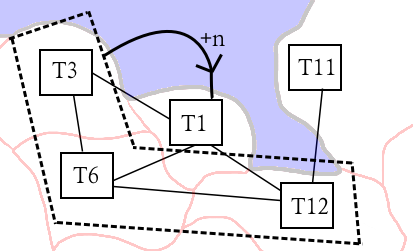 Variations on the hordes theme change the number of neighbors that need to be connected to collect the bonus (see, for example, Pangaea: Rise of the Chimp) or limit the neighbor requirement to only territories within a certain region of the board or matching a certain terrain characteristic (see, for example, Seven Kingdoms).

This is how it works using WarGear Modeling Language..

A continent structure in which a bonus is given for pairs of territories. In this way the bonus gained or each additional territory in the set is greater than for the previous territory.

For example, if a board offers a collector's bonus of +1 for every pair of Type A territories, then the bonuses would be as follows:

The general mathematical formula for collectors bonuses is as follows:

This can be a pain to input by hand into the Board Designer, which is why Ozyman's WGAME has a tool to automate the process. This technique originated with RiskyBack.

For example, if you set each individual territory with the collector trait to have a -1 continent bonus on its own, AND set a collector bonus of +1, then the bonuses would be as follows:

The general mathemetical formula is,

It is also possible to set collector bonuses for triplets, quadruplets, and so forth, in which case the formula is:

A common application of this variant is to create a win condition for owning any combination of M of a total of N territories, as in Thingol's board Ravenloft http://www.wargear.net/boards/view/Ravenloft+4. 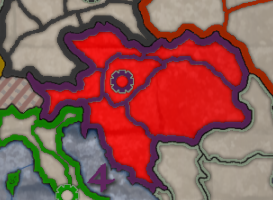 This design technique allows players to increase the bonus on an existing continent by also holding another territory or set of territories (kind of like an “upgrade” for that continent). In this example from Castles, the Austrian Empire (purple) gives a normal bonus of +4, but if you also hold the Budapest capital (the circle in the middle), the continent's value doubles, and it is worth +8 in total.