A website that allows you to calculate odds and simulate rolls1)

As explained in the WarGear FAQ:

How are dice different in SimulGear?

The easiest way to understand SimulGear is to imagine that it rolls one 100-sided dice for each attacker and defender. Each border is assigned an Attacker and Defender Percentage.

Example: The border between two territories is set to 60% for Attacker and 75% for Defender. 10 units Attack to a territory with 8 units defending.

It is important to note that the Attack % and Defend % is not a guaranteed kill % but instead an average kill %. In the example, the Attacker/Defender could actually kill anywhere from 0-100% depending on the outcome of the dice rolls.

The final note is important to keep in mind, as multiplying the number of attacking units by the Attack % will give you only an expected value (EV) for how many defending units you would eliminate. The EV tells you the average of all the attack outcomes if you replicated this attack thousands of times. The EV is useful for making a quick estimation of how many units you will need, at minimum, on a given attack or defense. However, it is not necessarily a safe bet to always base your orders on the EV since it does not give you the the probability of successfully conquering a territory if you attack X defenders with Y units. 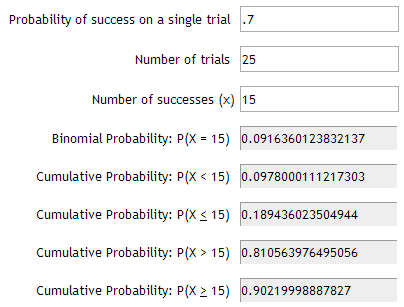 Say that you are playing a SimulGear game with Attack % of 70 and Defend % of 80. You can place anywhere from 20 to 30 units in territory A. You know (or make an educated guess) that your opponent will defend territory B with 15 units. How many should you place in A to have a good chance (say >90%) of taking B?

Using EV, 15/.7 ~= 21. On average, if you attack with 21 units you'll eliminate 15 defenders and take the territory. Using the cumulative probability calculator, the probability of eliminating at least 15 defenders with 21 attackers is only 55% – by no means a sure thing! If you want a >90% of success, you need to attack with at least 25 units.