Clicking on the Luck Stats link on the Game View page of a game will bring up a page with dice distribution tables. Premium members additionally receive “Luck Stats”. Luck Stats are also available to Premium members on the Player page via a pop-out window via the link in the breadcrumb area. The Dice distribution tables should be self-explanatory. This wiki focuses on the “Luck Stats” feature.

There is an expected number of armies you should win (or lose) with “average rolling”. Luck stats tells you how many armies above (+) or below (-) this average you have after rolling. Consider the following table of the probabilities when both attack and defending dice are 6-sided.

Luck stats are calculated by finding the difference between what you 'expect' to win and what you 'actually' win. Examples (all with 3v2 dice)..

The total - or average of all luck is always 0. When one player is 'lucky' (neutral counts as a player), some other player must be 'unlucky.'

In each column the large number in bold is the total number of kills or deaths. The number in parentheses breaks it down by specifying how many of those deaths were from attacking and defending dice. In the above chart..

While the luck Stat number you have in a game may tell you how far your number of kills or deaths are from the expected average, it is incorrect to assume that a certain number always indicates how lucky your rolls are.

The Most Common Luck Stat Fallacy

Luck Stats are cumulative; they simply add up. Interpreting them needs context. If you were told that a company made a $10,000 dollar profit, you would not have a good idea of how profitable that company really is until you found out about the time-frame involved. Is that $10,000 per day, per month, or per year ..or perhaps over the entire life-span of the company?

Interpreting Luck Stats requires similar context, but instead of time-frame, you need to know the number of battles fought, and unfortunately, unlike our company, comparing two luck stats is not just a simple matter of dividing them by their respective number of battles. Whereas most economic models would have companies making more money as time passes, dice probabilities have central tendencies, and WarGear Luck Stats have a central tendency of 0.

In theory, the most common WarGear luck stat should be 0. Even though there is more 'opportunity' for deviation from that central tendency (of 0) as more rolls are made, the sums of most samples (groups of rolls) will remain close to the central tendency. As a result, the value derived from dividing the Luck Stat by the number of battles will approach 0 as the number of battles increases.

Case 1 - If you were to roll 3v2 dice 3 times, losing all of your rolls for a total of 6 units lost, your Luck Stat would be -3.24, and most players would agree that you were pretty “unlucky.”

Case 2 - If you were to attack a stack of 48 units with a stack of 60 and not be able to win (depleting your stack in the process), your Luck Stat would very likely fall somewhere between -19 and -22.

Case 3 - If you were to win that stack of 48 (from Case 2), and ended up with 18 units to spare, you probably wouldn't blink. You might even be tempted to think you had better than average luck. Yet, your Luck stat would be -3 and fall right in the middle of the 15-21 bin of the histogram below. 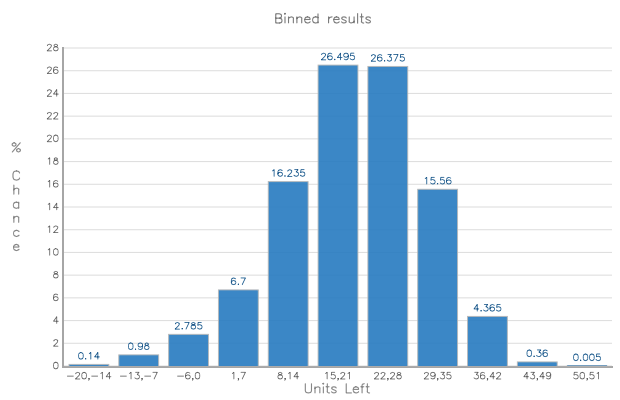 The above histogram suggests that you will win and end up with between 15 and 28 (Luck Stats from -6 to +7) units more than half the time when attacking a stack of 48 units with a stack of 60 units. In fact, to end up with an overall Luck Stat of -3 in this type of battle scenario could hardly be considered as being anything other than pretty average luck.

(The probabilities given for the “cases” used in this discussion were derived from various (and typical) samples of 20,000 simulations each using Ozyman's WarGear Simulator.