This is where the magic happens, and where you'll spend most of your time. The pull-down menu on the left lets you select five different design areas.

The territories you have made on your map are not recognized by the Designer until you identify them. 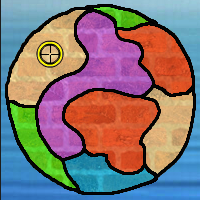 Here, the designer has defined and named the territory 'Northwest.' It is limited to holding a maximum of 10 units. 'Placement Enabled' means that players are allowed to place their bonus units on the territory.

Territories that touch (are contiguous) on your map are not recognized as sharing a border by the Player until you identify them. Once you have selected the 'Border' menu, you may define borders by selecting two territories and hitting the “Apply” button.

One-way/Two-way - Default → Two-way. When selecting One-way, the order in which you select the territories becomes relevant.

Attack Only - Players can only attack across this border and transfer their units across after a successful attack, they are not permitted to move units across the border in the fortify phase.

Fortify Only - This is the opposite of the Attack Only border - with this border type the player can only move units across the border in the Fortify phase.

View Only - This border type is only relevant when the game is played with Fog. When a player occupies the territory they can view the territory on the other side of the border but not attack or fortify to it - this could be used for example to give a watchtower position the ability to view enemy units but not be able to attack them. Continents

Here is an example of the menu using some of the above border modifications..

You don't have to make them one at a time, constantly having to hit the “Apply” button as you make each one. The designer includes a few handy tools to help make creating borders faster and easier.

Chain - Creates a border between each territory chosen and the previously chosen territory.

Border modifiers are an optional advanced gameplay feature that can be used to make it more or less likely that an attack over a particular border is successful. For instance, they can be used to simulate an artillery position attacking enemy units - where you would expect artillery to enjoy an advantage against enemy troops.

Border modifiers add to or subtract from the number of sides of the dice that the attacker and/or defender roll. Modifier values are added to the global dice settings, for which the default is 6-sided. For example, given the default global dice, a modifier of -2 would create 6 minus 2 = 4-sided dice. In this image, the designer has clicked on the large purple territory first - then the northwest territory. The attack line is highlighted (yellow), and the Attack and Defend dice modifiers seen in the menu only apply to attacks moving in that direction. 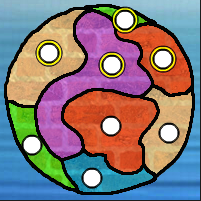 In this example, four territories have been selected and designated as a 'Continent' that the designer has named “Northern Hemisphere,” which will yield a bonus of 1 unit.

Factories are a special and powerful type of continent that require a separate tutorial, which you can find here.

The Setup option can be used by the designer to set up the board in a pre-determined way at the start of the game. For Setup to be honored in a game the Rule “Initial Setup” must be set to “Setup based”. In the Scenario view you can click on any of the territories on the board and set whether you would like them to be initially one of the following options: 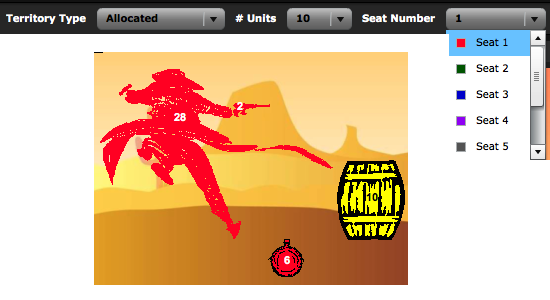 In the set-up above, the barrel is selected (selected territories always turn yellow), it is designated as Allocated to the 1st player (the red player), and it will start the game with 10 units.