This is an old revision of the document!

Move your bomber around the board and place bombs to clear paths and eliminate your enemies.

Always keep one bomber. If you have more that one square at the beginning of your turn, you will be eliminated.

Each turn you will have 2 units in one square. The square represents your bomber. The second unit is used to place a bomb, should you choose to do so.

With limited attacks be sure to plan your move so as to not accidentally end your turn with 2 squares and eliminate yourself by mistake.

All attacks are done with 1v1 dice, so never attack an occupied square.

Instead, all combat is done through bombs. Place a bomb and select a size, and be sure not to blow yourself up.

Use your second unit to take a bomb within a square in the arena to set ground zero. Use your Bomb Bag to select a size. Run. 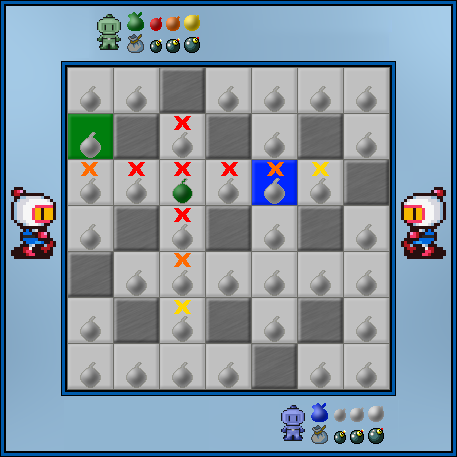 At the start of your turn, each square on the board affected by the bomb will lose 5 units.

Grey blocks and the edges of the map will block further explosion.

Each bomb requires all bomb sizes to the left be filled. To use a large bomb you must also own the medium and small bomb territories. Medium bombs require the small bomb as well.