There's actually more going on in this tab that might first meet the eye. The colors tab also controls a lot of the features important for boards with setup-based scenarios. We'll go through each column and what it does in turn.

Click here to type in a new name for the color in that row. Note that each name must be unique.

This is where you define pre-set teams for a setup-based scenario or board. You have to type the team name in for each row, and the text needs to match exactly for two rows to start on the same team. 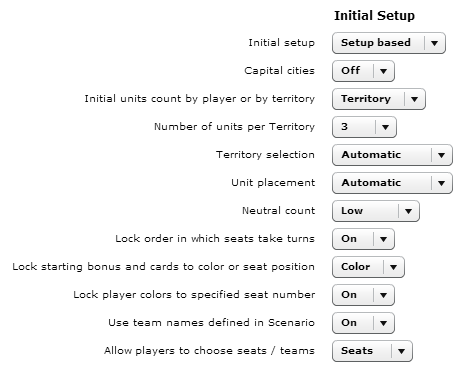 This is a rarely used feature, but useful for some scenarios. Enter the cards with which you would like each player to begin the game. If you leave it blank, everyone will start with no cards (a safe bet for most scenarios). To give a player cards at the beginning of the game, type in a string of text composed of the letters 'A', 'B', 'C' and 'W'. The number of As, Bs, Cs and Xs in this row corresponds to the number of each card the player starts with ('W' is the wild). So, for example, if you want a player to start with a set of cards, you could give them something like 'A,A,A' or 'A,B,C'. You could also give them a nice bonus by starting them with a wild, 'W'. For more information, see the WarGear Board Design FAQ.

A more commonly used feature, this column defines how many starting units each seat number/color will begin the game with. Note, if you define a starting bonus that is any value but 'Default', each player will start the game with that many units instead of the bonus calculated by the game engine (players will only collect their continent bonuses starting on turn 2). In the example depicted above under Team Name, each player begins the game with 5 units to place. For more information, see the WarGear Board Design FAQ.

All boards come will a range of default colors, but you are encouraged to customize your board's player color palette. Note that there are two ways to set the color. The easiest is to select from the palette of available options that display as a swatch. Enter the hexidecimal code in the text box for more precision. Hexidecimal entry can be particularly useful if you need to copy an exact shade that you have defined in your graphics editing program.

All boards come with the text color set optimally to contrast with the default 'player' colors. Set the text color to either black or white for each player color. Typically, you will want to select whichever one gives you a higher contrast (this will make the unit number easier to read on the player). You can preview the result in the Sample column.

Use the ↑ and ↓ to quickly reorder the seat numbers. The ⊗ deletes the row. Note that if you want to add a row at any point, click the ⊕ in the upper left-hand corner.