This is an old revision of the document! 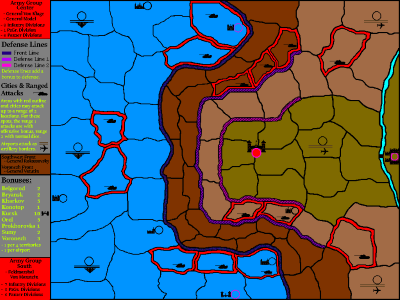 Kursk was the largest tank battle in history, during World War 2 and was one of the pivotal battles on the Eastern Front. This game is a simulgear game and requires management of large forces on a large front. If you like both Chess and Risk, then this board is for you.

2 - Basic, Pick Your Role (same as the default version except you can pick your side)

4 - Basic, Limited Orders - both sides are limited to 12 attack/defense orders instead of 30; the setup is a bit different than the default game to compensate.

5 - Basic, Limited Orders, Pick Your Role - this is the same as the Limited Order scenario except you can pick your side

6 - Team 2v2 - this is a 2on2 team game, with each side's forces divided into northern and southern players

For the German side:

For the Russian side: